Gout is a disease of excess uric acid. Primary gout is related to purine metabolism. Secondary gout is associated with medications, such as hydro-chlorothiazide, which increases urinary output, and acetyl-salicylic acid derivatives (including aspirin), which cause the production of uric acid in such large quantities that the kidneys are unable excrete it quickly enough.

Gout is marked by hyperuricemia; recurrent, often progressive arthritis; and deposition of monosodium urate (MSU) crystals in the articular cartilage and skin. Hyperuricemia is defined as a plasma urate (uric acid) level >420 µmol/L (7.0 mg/dL) in men or 380 µmol/L (6.3 mg/dL) in women. Men are affected more than women at a ratio of about 10 to 1. In men, hyperuricemia can occur around the time of puberty, while in women it develops around menopause. About 1% of the population in the United States has some aspect of gout.

Normally, the kidney removes the uric acid from the blood, but in patients with a predisposition for gout, the uric acid accumulates. WBCs ingest the MSU crystals and burst, triggering an inflammatory response. Hyperuricemia is the usual basis for a diagnosis of gout. However, 95% of men and women with hyperuricemia do not develop gout, and gout can occur without hyperuricemia. In those instances, diagnosis must be based on pathologic (examination of fluid and tissue) and clinical findings. Other risk factors for gout are obesity, high BP, heart disease, and diabetes. 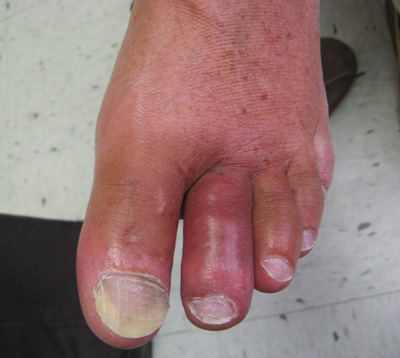 The various cutaneous manifestations of gout include gouty tophi, knobby deformities, and a cellulitis eruption. Gouty tophi represent the aggregation of uric acid crystals in the skin. With disease progression, gouty tophi can increase in size and number. Tophi range from 1 mm to 10 cm and are white or yellow. The lesions most commonly manifest on the helix and anthelix of the ear; as well as in the prepatellar and olecranon bursae.

The material in tophi can be aspirated; visual assessment with a polarized microscope will reveal prototypic birefringence of uric acid crystals. Uric acid also forms aggregations in the finger, wrist, toe, and ankle tendons and can form knobby deformities. Urate can also aggregate in the bone, myocardium, and heart valves, but these are not related to skin changes.

The differential dermatologic diagnosis of gouty tophi includes pseudogout (chondrocalcinosis), multicentric reticulohistiocytosis, rheumatoid nodules, and septic arthritis. Pseudogout, which results from deposition of calcium pyrophosphate, is also a familial disease and can manifest with chronic arthritis. Unlike gout, pseudogout has no specific therapy. Multicentric reticulohistiocytosis, which can result in a mutilating arthritis, can manifest with nodules that are redder than those seen in gout and have a quality of dermal infiltration on the ears and fingers. Rheumatoid nodules demonstrate necrobiosis histologically and are red/pink rather than white/yellow. These nodules are often associated with rheumatoid arthritis or other collagen vascular diseases. Septic arthritis is associated with an infection, is more common in diabetes, and manifests with greater pain, higher fever and WBC counts, and lymphangitic spread.

Gout can manifest with transient painful attacks of acute arthritis related to crystallization of urates within and about the joints. Sudden burning pain, edema, redness, warmth, and stiffness manifest in an affected joint. As such, gout can also resemble cellulitis. In acute gouty attacks, the toes, ankles, and feet often turn red to deep red or purple and become edematous. The skin is inflamed and warm and tender to the touch. The joints of the foot can be stiff. In such cases, the foot resembles a foot infected with cellulitis. An initial gout attack may be misdiagnosed as cellulitis. Initial attacks most commonly affect the great toe (referred to as podagra); symptoms last a week. Gout that affects the knee is called gonagra. In patients with a history of gout, misdiagnosis as cellulitis occurs less often. After the erythema and edema of gout resolve, desquamation can occur. Ten percent of patients who suffer an acute attack of gout will not suffer another attack.

Colchicine is used to treat acute gout attacks. It should be administered in doses of 0.5-0.6 mg hourly within the first 12 hours of onset. Therapy should continue until symptoms abate or adverse GI effects (diarrhea and nausea) are noted. A total dose of 6 mg (10 tablets, 0.6 mg each) is needed to treat an acute gout attack. Relief usually occurs within 48 hours, although side effects can complicate colchicine use. In patients with renal or hepatic insufficiency, the total dose of colchicine and the administration schedule should be reduced. Pain relief can be achieved with nonsteroidal anti-inflammatory drugs, particularly indomethacin (Indocin).

Attacks of gout can be prevented by lowering serum uric acid levels. Even in the absence of joint inflammation, synovial fluid can contain urate crystals, the mere presence of which does not incite gout. Allopurinol reduces the level of uric acid in the blood and can prevent gout. If given during an acute
attack, however, allopurinol can make the attack worse by transiently increasing the level of uric acid.  The mechanism is thought to be mobilization from tophi of urate crystals, which then enter the bloodstream and can exacerbate arthritis at other sites. Lifestyle modifications, such as decreasing consumption of alcohol, especially beer; avoidance of foods with a high protein or purine content, including liver, kidneys, sardines, and anchovies; and weight loss, can decrease the incidence and severity of gout.

This patient took colchicine (4 mg) and indomethacin 50 mg b.i.d. for three days, along with omeprazole (Prilosec) to alleviate GI effects. Over the following week, his pain abated and the redness and swelling decreased.