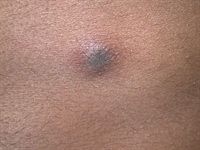 A 35-year-old African American woman presented to the dermatology clinic with a leg lesion of one year’s duration. Initially a red, hivelike insect bite, the lesion had evolved within a month into a purple-brown papule that dimpled inward when squeezed. The lesion did not itch, burn, or hurt. Blood chemistry results were unremarkable; testing for antinuclear antibodies and HIV was negative. The patient was not taking any oral medications. No similar lesions were visible on the patient’s body.

The patient was a 40-year-old white man who complained of a purple lesion that had been present on the shaft of his penis for two months. The lesion itched but did not burn or hurt. Further examination revealed no other abnormal skin findings; in particular, there was no pathology of the scalp, nails, or mouth. A complete blood count and blood chemistries, including a rapid plasma reagin determination, were normal. The patient was in a monogamous relationship with his wife. He was unaware of any family history of a similar rash.