Mrs. G, 53 years old, complained of genital swelling and burning, with vaginal discharge. Three weeks earlier, she had been diagnosed by her gynecologist with Trichomonas vaginalis infection on Pap smear. He had prescribed a one-week treatment of oral metronidazole 2 g daily. Her husband had tested negative for the organism, but he received the same treatment for prophylaxis.

Symptom improvement was seen for a few days following treatment, but one week later, Mrs. G returned to her gynecologist’s office with continued vaginal complaints. She was treated with a second course of metronidazole for approximately five days (she could not remember the exact dosage). Again, the symptoms improved initially, only to return a few days later. At this point, she was referred to our clinic for evaluation.

Mrs. G reported no sexual contact for the past two months. Married for more than 20 years, she denied any sexual partners other than her husband and believed that he, too, was monogamous. Mrs. G thought that she initially had become infected with T. vaginalis when water from a public toilet splashed her vaginal area.

On examination, the vulva was erythematous and edematous with punctate microhemorrhages; a yellow frothy discharge was seen in the introital area (Figure 1). The vagina was also erythematous, with copious amounts of discharge. The saline wet mount demonstrated numerous mobile trichomonads and leukocytes.

One week later, Mrs. G continued to have vaginal discharge and irritation. She firmly reported continued abstention from sexual contact with her husband. On examination, her vagina was friable and ulcerated. Small, punctate, cervical hemorrhages — “colpitis macularis,” also referred to as “strawberry cervix” — were present, with a yellow frothy discharge.

At this point, we were convinced that Mrs. G had resistant trichomonas. We discussed an optional medication, tinidazole, which was not available in the United States at that time (it is now FDA approved). Mrs. G was amenable to this therapy. Her husband happened to be traveling outside the United States and was able to purchase the medication. Both Mrs. G and her husband completed a one-week course of oral tinidazole 2 g daily.

Unfortunately, Mrs. G’s follow-up examination remained unchanged despite the use of tinidazole. She continued to deny any sexual contact. A second week-long course of tinidazole 2 g provided no symptom relief. A culture was sent to the CDC for sensitivity testing.

Because of the severity of her symptoms as well as a four- to six-week delay in obtaining test results from the CDC, Mrs. G was started on a 14-day course of paromomycin cream 5 g, applied nightly to her vagina. One week after treatment completion, the T. vaginalis had cleared, and Mrs. G’s clinical symptoms had improved dramatically.

The CDC analysis of Mrs. G’s T. vaginalis isolate stated that “based on the in vitro metronidazole susceptibility testing, this isolate would be considered highly resistant to metronidazole and tinidazole.” In such cases, CDC treatment recommendations include intravaginal furazolidone, the dosage of which would be determined at a later time following consultation. If this regimen were to fail, the CDC would recommend higher doses of tinidazole.

The three leading causes of vaginal discharge are bacterial vaginosis (BV), vulvovaginal candidiasis, and trichomoniasis, which is caused by the protozoal organism T. vaginalis. More than five million cases of trichomoniasis occur annually in the United States alone.

Resistant trichomonas is extremely rare. A suspected diagnosis of resistant trichomonas should be confirmed either by visualization of motile trichomonads on saline microscopy or culture. Reinfection from sexual contact must be ruled out with a thorough sexual history. The primary reason for treatment failure is re-exposure.

Most women exhibit diffuse, malodorous, yellow-green vaginal discharge with vulvar irritation; some have minimal or no symptoms. Vaginal trichomoniasis has been associated with adverse pregnancy outcomes, particularly premature rupture of the membranes, preterm delivery, and low birth weight.

Diagnosis in women can be enhanced by determination of the vaginal pH, with microscopic examination of the discharge, and observation of clinical signs and symptoms. Normal vaginal pH is 3.8-4.2. Narrow-range pH paper should be used to determine an elevation >4.5. Microscopic examination of vaginal secretions includes the addition of one to two drops of 0.9% normal saline solution on one slide. The specimen is then examined under low- and high-dry power, at which point the motile T. vaginalis can be identified. This method has a sensitivity of only 60%-70%.

Diagnosing trichomonas infection on a Pap smear should be done with caution. In Mrs. G’s case, the diagnosis was correct, but a high percentage of false-positive and false-negative results can occur with a Pap-smear diagnosis.

It is extremely difficult to diagnosis trichomoniasis in men. Most who are infected display no symptoms, although occasionally, they may exhibit signs of nongonococcal urethritis. Also, male partners frequently are not treated because initial tests are negative.

A saline wet mount of expressed discharge may also be used for diagnosis in men, but this test has a low sensitivity. Alternatively, spun urine may be analyzed and sediment utilized for culture. This is the most sensitive commercially available method of diagnosis and can be used in both men and women. No FDA-approved polymerase chain reaction (PCR) test is available in the United States at this time, although some commercial laboratories have designed their own PCR tests.

Fomite transmission of the organism theoretically could occur. Trichomonads can survive for up to 45 minutes on a toilet seat, in bathwater, or on a washrag or clothing. Generally, this form of transmission does not carry enough inoculate to infect the host. As such, the overwhelming majority of cases are sexually transmitted infections.

The only antibiotic approved by the FDA for treatment of trichomoniasis at the time of this case was oral or IV metronidazole. A cure rate of approximately 90%-95% has been reported in randomized clinical trials.

Although metronidazole gel is used for treating BV, topical therapy is not recommended for trichomoniasis because reservoirs of infection may exist in the perivaginal glands and urethra. Therapeutic levels are not adequate to treat these areas and are considerably less efficacious, with failure rates approaching 50%. Other topical antimicrobials have occasionally been used but are unlikely to have greater efficacy than metronidazole gel.

Sex partners of patients with T. vaginalis should be treated even if they do not exhibit any signs and symptoms of infection. Patients should avoid any form of sexual contact until both they and their partners are free of infection. Follow-up is not required for those who become asymptomatic after treatment or who are initially asymptomatic.

Diminished susceptibility of the trichomonal organism to metronidazole has been reported, with most cases responding to higher doses of medication. If presumed treatment failure occurs, patients should be asked about sexual contact with a potentially infected partner. Once such a possibility is ruled out, the patient should be treated with metronidazole 500 mg twice daily for seven days or a single 2-g dose of tinidazole. If failure continues and sexual contact is again ruled out, the patient should receive metronidazole 2 g daily for three to five days.

Patients with documented infection who are not reinfected and do not respond to a second treatment regimen should be managed in consultation with a specialist, with the determination of susceptibility of T. vaginalis to metronidazole. Consultation is available from the CDC.

Ms. Grimshaw is a family nurse practitioner and assistant medical director of the Montefiore Medical Center STD Center for Excellence in Bronx, N.Y., where Dr. Gilbert is medical director. He is also an assistant clinical professor of medicine and obstetrics and gynecology at Albert Einstein College of Medicine, Bronx. 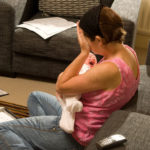