Mr. B, aged 46 years, had a medical history significant for hypertension. He presented to the hospital with a three-day history of intermittent left-sided chest pain following cocaine use.

Vitals on presentation showed temperature 98.4˚F, BP 146/78 mm Hg, heart rate 106 beats per minute, and respiratory rate 12 breaths per minute. Physical examination was unremarkable. As part of an admission order protocol, Mr. B received an influenza vaccine in the right deltoid and a pneumococcal vaccine (Pneumovax) in the left deltoid.

On his second day in the hospital, Mr. B had a temperature of 104˚F with sinus tachycardia to 140 beats per minute and was treated with acetaminophen (Tylenol). Localized redness was noted on the left upper arm at the site of injection (Figure 1).

The patient also complained of a headache located in the frontal region. Cerebrospinal fluid (CSF) analysis following lumbar puncture showed WBC 9/μL with 92% lymphocytes. No organisms or polymorphonuclear WBCs were visible on Gram stain. A stress echocardiogram revealed no clinical, electrocardiographic, or echocardiographic evidence of ischemia. On his third day at the hospital, the patient had no fever, but a 20 x 10 cm area of erythema was seen on the left arm at the site of the vaccination. No antibiotics were given, as the patient was improving with regard to temperature, and the reaction was likely an immune response to pneumococcal vaccine and not bacterial in origin.

Mr. B’s severe headache in the occipital area was worse when standing or sitting and improved when lying down. No photophobia, chills, neck pain, confusion, or visual changes were noted. The headache did not resolve with IV hydration, bed rest, liberal fluid intake, oral analgesics and IV caffeine.

An epidural blood patch placed on the fourth day of Mr. B’s hospital stay completely resolved his headache. The patient remained afebrile, with roughly 90% of the erythema resolved, and he was discharged home the next day. A report was filed online through the U. S. Department of Health and Human Services’ Vaccine Adverse Event Reporting System.

The clinical history is generally not useful in diagnosing meningitis, with findings from one clinical trial indicating a low diagnostic specificity for several symptoms: 15% for nonpulsatile headache, 50% for generalized headache and 60% for nausea and vomiting.2 Onset is often subacute with a preceding upper-respiratory-tract infection.

The definitive diagnosis depends on the results from CSF examination. CSF gram stain reveals the causative agent in 70% to 80% of cases and is positive in 80% to 90% of patients with bacterial meningitis.3

The physical exam can provide clues to the diagnosis, including nuchal rigidity, change in mental status, Kernig’s sign and Brudzinski’s sign. Nuchal rigidity refers to flexion of the neck (either active or passive) with inability to touch the chin to the chest. If full range of motion is present, nuchal rigidity is absent.

Signs of meningeal irritation can be assessed by the appearance of Kernig’s and Brudzinski’s signs. Kernig’s sign refers to extension of the knee eliciting pain in the lower back or posterior thigh when the patient is lying supine and the hip is flexed at 90˚.

Patients may also show opisthotonus spasm of the whole body that causes the legs and head to be bent back and the body bowed backward. Kernig’s sign may indicate subarachnoid hemorrhage or meningitis. 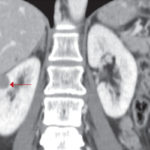