Jeff was a 55-year-old married white man working as an attorney in a major city on the eastern coast of the United States. He had been healthy, with all immunizations up-to-date, and had not recently traveled. In late January 2014, Jeff developed fatigue, an elevated temperature, chills, and a sore throat. He noted multiple vesicles in the back of his throat. After 2 days, a pruritic eruption of small vesicles began on the dorsal and palmar surfaces of his hands. The vesicles increased rapidly and also appeared on the sole of one foot, along with a diffuse, raised rash on his lower trunk and upper buttocks. In addition to the vesicles, mild swelling of his hands developed. Over the next few days, the rash and discomfort dramatically increased to the point of causing severe pain; Jeff was unable to sleep and experienced uncontrolled itching. Because of the pain, he was no longer able to button his clothing or hold utensils to feed himself. The fever and symptoms continued during the week after onset. Jeff recorded a temperature of 100.8 degrees after taking ibuprofen. At this point—with the distressing symptoms and continued fever—Jeff sought treatment at an urgent care facility in his community (Figures 1 and 2). Other household members were healthy, without any reported recent illnesses. Jeff did like to visit and play with his 2-year-old grandson, who attended day care and had his usual share of viral illnesses. 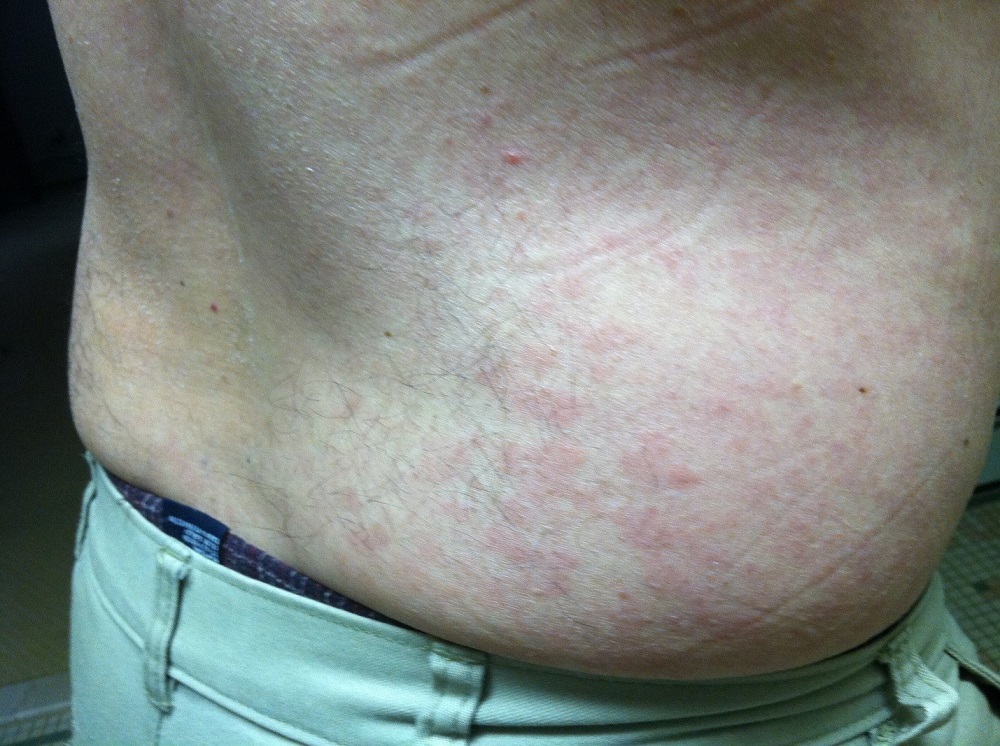 Based on Jeff’s presentation and his risk for exposure via his grandchild, the provider diagnosed HFMD but was concerned bout the extent of his discomfort and the severity of the hand rash, stating that it was the “worst case I have ever seen.” The provider attempted to schedule an appointment with an infectious disease specialist for a second opinion and guidance; however, an appointment was not available before 3 weeks. Jeff was sent home with an analgesic (300 mg of acetaminophen with 30 mg of codeine as needed every 6 hours) for pain and an antihistamine (25 mg of hydroxyzine by mouth three times a day) to relieve the itching and help him sleep. Both medications provided some relief. The day following the urgent care appointment, the vesicles continued to grow and enlarged into bullae; some appeared to contain blood or were surrounded by bruising (Figure 3). After 1 week, the fever had resolved, the rash on his lower back and buttocks had also faded, and the vesicles were in various stages of healing. Jeff was able to move his hands, the swelling decreased, and he could maintain basic self-care. Other vesicles had opened and drained serosanguinous fluid. These vesicles were reported to be the most painful. After a few more days, the vesicles dried and formed crusts.

What is usually a mildly annoying child’s illness caused 3 weeks of despair for this male adult patient. It resulted in 2 weeks of missed work and the need for more than 1 month of care for his hands as the affected areas healed. His healing hands drew attention, particularly while he was in public and especially when he was expected to shake hands with clients at work. After 3 months, remnants of scars remained on Jeff’s hands.