Many people mistake the first signs of methicillin-resistant Staphylococcus aureus (MRSA) infection for a spider bite. In fact, what appears as a small, red pimple could be the start of a potentially serious infection with a staphylococcus that is impervious to many antibiotics and poses an increasing threat in the community setting.

Scientists first discovered S. aureus in the 1880s.1 Traditionally, the bacterium has caused skin and tissue infections, but it can also cause food poisoning and, in more serious cases, bacterial pneumonia or septicemia.

In the late 1940s, S. aureus began a dangerous evolution when it became resistant to penicillin. With their primary weapon against the organism taken out of commission, clinicians began using methicillin, a relative of penicillin, to treat S. aureus infections. But in 1961, scientists got some bad news with the discovery of S. aureus strains that had become resistant to beta-lactams, including amoxicillin and methicillin, giving MRSA its name.1

The first infection involving MRSA in the United States was diagnosed in 1968, and the organism has continued to evolve ever since. Beginning in 2002, there have been a handful of cases documented in which the bacterium was also found to be resistant to one of the last available drugs being used to treat it — vancomycin (Vancocin).

Despite that ominous development, there has recently been encouraging news from the CDC that hospital-acquired MRSA (HA-MRSA) infections are decreasing.2 The number of invasive HA-MRSA infections dropped 28% between 2005 and 2008. Unfortunately, the same is not true of community-acquired MRSA (CA-MRSA) cases, which have risen rapidly in the past 10 years.2 Because MRSA is circulating widely in the general population, primary-care clinicians must be prepared to recognize it, treat it effectively and take steps to reduce its transmission.

Historically, most cases of MRSA infection occurred in the hospital setting, but in 1982, cases began cropping up in community settings among individuals who had not been hospitalized. The first domestic cluster involved a group of IV-drug users in Detroit. A second cluster of drug users was infected in 1992, and the prevalence of CA-MRSA began to increase in the community at large in the mid-1990s.

Most CA-MRSA cases have originated in prisons, day-care centers and athletic or military facilities. But MRSA is not limited to those sites. It has also been found in other locations, including Washington State beaches and marine water. 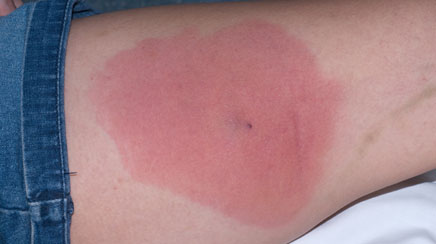 While the majority of CA-MRSA cases are more easily treated than HA-MRSA cases, the bacterium responsible for CA-MRSA is actually more virulent than its hospital counterpart. Three different S. aureus strains typically cause community infection, which often involves a variety of toxins including leukocyte toxins, exfoliative toxins and exotoxins, making the causative organisms highly virulent pathogens.

MRSA colonization is a risk factor for infection, although the link between colonization and infection needs further investigation. The organism is sometimes found on the skin or carried inside the nose of healthy individuals.

Other risk factors for infection include:

People who come into contact with farm animals may also be at greater risk for infection. Pigs, cattle, and poultry are increasingly being found with a new clone of MRSA, CC398. And farm animals are not the only ones becoming infected. Rates of MRSA are also up among household pets, such as dogs and cats.

While people can contract MRSA infections from many different sources, the most common route to infection remains transmission through direct skin-to-skin contact. Clinicians should remember that when it comes to MRSA, essentially everyone is at risk.

Most patients with CA-MRSA will present with a skin or soft-tissue infection. Clinicians should assume that any spider bite, large pimple, or boil is MRSA until they have evidence to the contrary.

The first step in treating MRSA infections is to incise and drain the area. This may be sufficient to treat abscesses <5 cm in diameter. The clinician should send a sample of the material collected for culture and sensitivity. Once the incision and drainage is complete, antibiotic treatment should be considered.

In addition to the antibiotics listed above, a number of emerging therapies may be useful for the treatment of MRSA, including dalbavancin, telavancin (Vibativ, Theravance), and ceftobiprole.

Oral antibiotics. Some antibiotics available in oral formulations are treatment options for MRSA:

Drugs to be avoided. Erythromycin (Ery-tab, PCE) and cephalexin (Keflex) are ineffective against MRSA, and ciprofloxacin (Cipro) and levofloxacin (Levaquin) are to be avoided because rates of MRSA infection are increased in hospitalized patients treated with quinolones. Bacitracin and neomycin, two common ingredients in OTC antibacterial ointments, are not recommended for the treatment of MRSA, although a recent study indicates that they may be effective against a specific clone of MRSA.7

Empiric MRSA coverage is not necessary for children who have uncomplicated skin infections. Researchers found no difference in outcome between children randomly assigned to receive cephalexin, an antibiotic without MRSA activity, or clindamycin. The children received cephalexin 40 mg/kg/day in three divided doses or clindamycin 20 mg/kg/day also in three divided doses for seven days.8