Uncomplicated urinary tract infection is appropriately treated according to guidelines in the vast majority of women with equal access to health care, a new study finds, but there is still room for improvement in inappropriate antibiotic prescribing.

Among 46,793 women aged 18 to 50 years in the US Military Health System with uncomplicated acute cystitis, 91% received treatment in accordance with 2011 guidelines for premenopausal women from the Infectious Diseases Society of America (IDSA), Jacqueline Y. Kikuchi, MD, of the Johns Hopkins University School of Medicine in Baltimore, Maryland, and colleagues reported in JAMA Network Open. In this population, IDSA recommends first-line therapy with nitrofurantoin monohydrate/macrocrystals, trimethoprim-sulfamethoxazole, fosfomycin trometamol, or pivmecillinam. The society discouraged use of fluoroquinolone antibiotics.

“Lower rates of IDSA guideline concordance were seen in obstetrics and gynecology and urology, which could potentially benefit from targeted antibiotic stewardship programs and policies that promote greater adherence to IDSA guidelines,” Dr Kikuchi’s team stated.

The findings on inappropriate antibiotic prescribing for uncomplicated cystitis contrast with results from a 2021 study, published in the American Journal of Obstetrics & Gynecology, which found that OB/GYNs and urologists had a significantly higher likelihood of concordant treatment compared with all other specialties combined.

Among the current study’s limitations, the investigators could not analyze the dosage or duration of antibiotic therapy or urine culture results. They also could not determine which patients received inappropriate antibiotic therapy for asymptomatic bacteriuria rather than uncomplicated cystitis. 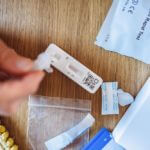