A 36-year-old male presents with firm, round, papules on his scrotum. The patient is otherwise asymptomatic.

Idiopathic scrotal calcinosis (ISC), also known as idiopathic calcified nodules of the scrotum, is a condition characterized by gradual growth of multiple nodules on the scrotal skin. It is the most common form of idiopathic calcinosis cutis, a group of diseases wherein calcium deposits in the skin.

Lesions classically present in young to middle-aged adult men as asymptomatic, firm, round, papules on the scrotal skin that range in size from several millimeters up to 1 cm in diameter.

The colors of the papules range from yellow to brown to white. In many cases, the nodules are said to resemble epidermal inclusion cysts, which many investigators believe is the underlying pathophysiology behind ISC.

The intradermal nodules of ISC may be solitary or grouped and tend to increase in number and size over time. The lesions are usually firm and asymptomatic, but reports of itching and burning of the lesions exists. Infection of the scrotal lesions has also been reported.

In other reports, applications of lateral pressure to the nodules have produced a white, chalky, exudative material, consistent with the calcified composition of the lesions.

The pathophysiology of ISC remains controversial. As of now, scrotal calcinosis is classified as an idiopathic cutaneous calcification, in that no local or systemic cause can be identified. Some investigators suggest that ISC is a late presentation of epidermal inclusion cysts (EIC) of the scrotum that have then undergone dystrophic calcification.

Although histologically some nodules may present as EICs with calcification, many lesions in ISC contain completely unencapsulated calcifications without evidence of EIC. Other investigators have suggested that ISC is a result of necrosis of the dartos muscle with resulting dystrophic calcification, the pathophysiology of which would be similar to the calcification of a uterine leiomyoma.

A recent study that reviewed the histology of 100 scrotal nodules discovered a spectrum of diseases in the lesions. Some lesions were completely epidermoid cysts with foci of calcifications. Others contained completely unencapsulated calcifications. Some intermediate lesions contain calcifications with degeneration of some to most of the cyst wall.

Surgery is the treatment of choice of ISC and generally results in good clinical and cosmetic outcomes. Multiple elliptical excisions and the scrotal skin’s laxity allows for good scrotal coverage even after removal of multiple large nodules.

Surgery usually results in an excellent cosmetic outcome. However, the risk of recurrence is controversial, with some disagreeing with surgical excision because of the high probability of ISC recurrence.

A female equivalent, idiopathic calcinosis of the vulva has also been described, with similar calcified lesions seen on the labia majora. Calcinosis of the areola is a rare condition with a similar appearance.

Subepidermal calcified nodule (SCN), also known as solitary congenital nodular calcification, may present as a solitary or few firm nodules on the head and neck, particularly the ears. These lesions are fixed and uninflamed and are often confused with molluscum contagiosum with a central umbilication.

SCN usually develops in children. The average age of onset is 7 years, but SCN has been observed in all age groups. Although the disorder is currently considered idiopathic, possible causes range from trauma to calcification of a pre-existing milium, eccrine duct hamartoma or hair follicle nevus.

Affected patients usually do not have a clear underlying pathology, although two thirds of patients with SCN have Down syndrome. On biopsy and histology, subepidermal calcified nodules present as a focal amorphous calcified mass with surrounding inflammatory infiltrate.

Epidermal ulcerations and transepidermal elimination of the calcium deposits occur frequently. Treatment is not required, but surgical removal can be performed for cosmetic purposes, if the lesions are asymptomatic.

Calciphylaxis is a condition characterized by vascular calcifications, thrombosis and skin necrosis. The disease occurs most frequently in patients with chronic renal failure, type 2 diabetes and obesity.

Calciphylaxis clinically begins as fixed livedo reticularis, which in 90% of cases begin below the knee. Overtime, the lesions become increasingly violaceous and can eventually become purpuric, bullous and necrotic.

Calciphylaxis is very painful and requires narcotics analgesia for control. Diagnosis is made with an incisional biopsy in an area with erythema or purpura that is adjacent to the necrotic area.

The goal of calciphylaxis treatment is alteration of the abnormal calcium metabolism. Low calcium dialysis, oral phosphate binders, bisphosphonates and intravenous sodium thiosulfate are all options that have been used with success.

Ulcer debridement has been shown to increase healing and improve survival. Painful ulcers may also respond to hyperbaric oxygen therapy.

Parathyroidectomy is traditionally reserved for refractory calciphylaxis in the context of an elevated parathyroid hormone levels.

Median raphe cysts of the penis are developmental defects that occur on the ventral midline of the perineum from the anus to the urethra. They most commonly present as dermal lesions less than 1 cm in diameter on the distal ventral shaft, near the glans of the penis after sexual-intercourse-associated trauma.

The cysts are often described as a cord, or a series of beads (termed canal-like). The cysts develop from aberrant urethral epithelium, but do not themselves form connections with the urethra.

Christopher Chu, BS, is a medical student at Baylor College of Medicine. 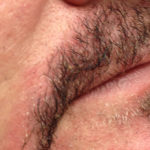 Derm Dx: A pruritic scaly rash on the beard