A white man, aged 33 years, presented with lesions on his tongue that had been present for three months. The lesions began as white plaques that enlarged and developed a central erythematous atrophic area. The lesions seemed to heal and develop in new areas on his tongue every week. No pain, pruritus, or taste disturbance was reported.

History was significant for guttate psoriasis. Review of systems was otherwise negative. On physical exam, annular white plaques surrounding erythematous atrophic papillae were appreciated on the dorsal tip of the tongue.

A Hispanic man, aged 28 years, presented with complaints of a white tongue for two months. The plaque was asymptomatic and slowly enlarging. Scraping the lesion at home with a toothbrush only caused bleeding. The man had a history of asthma for which he was using an inhaled corticosteroid. Review of systems was otherwise negative.

Adherent white plaques were noted on the dorsal tongue and buccal mucosa. A shallow crusted erosion was also noted on the middle of the lower lip. The remainder of the examination was within normal limits.

HOW TO TAKE THE POST-TEST: This Clinical Advisor CME activity consists of 3 articles. To obtain credit, you must also read Tender atrophic plaque on the arm and chest and Firm indurated lesion with hair loss.

Geographic tongue is a benign clinical condition that occurs in approximately 1% to 3% of the population.1 The disorder is also known as benign migratory gloss­itis, glossitis areata migrans, stomatitis areata migrans, and benign migratory stomatitis. Geographic tongue appears to affect both sexes equally, although some studies have shown a 2:1 female-to-male ratio.1 The condition does not discriminate between races. However, adults tend to suffer from the disorder more than do children.

Although geographic tongue has been documented for many years, not much is known about the history or pathogenesis of the disorder. It is believed to have a polygenic mode of inheritance due to its prevalence and clustering within families.

A Brazilian study concluded that geographic tongue is associated with the human leukocyte antigen (HLA) group HLA-Cw6.2 This is the same HLA group found in many patients who suffer from psoriasis. Other reports have shown that in psoriatic patients, 10% had coexisting geographic tongue, whereas only 2.5% of age-matched and sex-matched subjects were affected by the disorder.3

The plaques associated with the disorder are most commonly found on the anterior two-thirds of the dorsal tongue. The tip and lateral borders are the areas within this region that generally have the highest concentration of lesions. Rarely, the plaques will develop on such other oral mucosal sites as the buccal mucosa, labial mucosa, and soft palate. Even in these instances, the tongue is almost invariably involved.

The lesions start as a small white patch that enlarges centrifugally and develops a central erythematous atrophic zone. The central erythematous region is the result of atrophic filiform papillae. The atrophic areas are at least partly surrounded by an elevated yellowish-white serpiginous or scalloped border. Patients are often unaware of the disorder until the lesions are found on routine oral examination.

Those who do notice the migratory plaques often report a history of the lesions healing within a few days or weeks with the development of new lesions in a different area. Geographic tongue is usually an asymptomatic disorder. Some patients experience a burning sensation or sensitivity to hot and/or spicy foods. In very rare instances, these burning sensations will be severe or constant enough to cause a change in lifestyle and diet.

Geographic tongue can usually be diagnosed clinically. If a biopsy is needed, the specimen should be obtained from the peripheral portion of the lesion. Histologically, geographic tongue is described as a psoriasiform mucositis because many of the features resemble cutaneous psoriasis. Classic features include hyperparakeratosis, acanthosis, elongated epithelial rete ridges, and spongiosis. Munro microabscesses—collections of neutrophils within the epithelium—may also be observed. The neutrophilic involvement may be so intense that it is thought by some to be responsible for the destruction and atrophy of the superficial epithelium.

Erythroplakia, leukoplakia, and oral candidiasis should be considered in the differential diagnosis. A yellowish-white serpiginous or annular border surrounding an erythematous atrophic region is a classic clinical feature for geographic tongue and should prevent confusion. A cutaneous examination to look for psoriasis may also help to clinch the diagnosis.

Erythroplakia is predominantly a disease of middle-aged to older adults, and lesions most commonly affect the tongue, soft palate, and floor of the mouth. Multiple lesions may be present and appear as well-demarcated erythematous patches or plaques.

Erythematous candidiasis presents as erythematous patches on the tongue that have lost the filiform papillae. White flecks may be seen surrounding the erythematous atrophic areas but are not a major component.

Generally, no treatment is necessary because the lesions of geographic tongue are benign in nature and typically asymptomatic. Patient reassurance usually is all that is needed. In patients experiencing discomfort and pain, consider advising avoidance of spicy foods, gentle brushing of the tongue, and avoidance of harsh mouthwashes. The latter may be replaced with a soothing saline rinse.

Besides altering oral-health habits, patients may use such topical corticosteroids as fluocinonide or betamethasone gel, which can provide relief when applied directly to the lesions as a thin film several times per day. Recently, topical tacrolimus 0.1% ointment has been used successfully for treatment of symptomatic geographic tongue.4

Given that the lesions in this case were asymptomatic, no treatment was given. The man was reassured that geographic tongue is a benign disorder.

Oral candidiasis, also known as thrush, was first described in 1838 by French pediatrician Francois Valleix. It is considered the most common oral fungal infection and is typically caused by the yeastlike fungal organism, Candida albicans. Other members of the Candida genus, such as C. tropicalis, C. krusei, C. parapsilosis, and C. guilliermondii, may also be found in the oral cavity but rarely cause the disorder. No racial or gender predisposition has been found.

Dimorphic in nature, C. albicans can exist in either hyphal form or yeast form. The hyphal form is usually associated with invasion of the host, whereas the yeast form is relatively harmless. Candida albicans may be a component of the normal oral microflora in approximately 30% to 50% of individuals.5 Most of these patients will carry the organism without any clinical evidence of infection. The disease most commonly occurs in neonates and infants, patients with a history of broad-spectrum antibiotic or corticosteroid use, those afflicted with xerostomia, and the immunosuppressed (e.g., the elderly or individuals debilitated by diabetes mellitus or HIV).6 Infants are very susceptible, with approximately 37% developing the infection before the first month of life.

The lesions are most commonly seen affecting the buccal mucosa, palate, gingiva, pharynx, and/or dorsal tongue. The white plaques consist of yeast, masses of hyphae, desquamated epithelial cells, and debris. Scraping the plaques with a tongue blade or rubbing them with gauze can remove the lesions. The underlying mucosa may be normal or erythematous and often bleeds.

The histologic picture varies depending on which clinical form of the infection is being evaluated. Most commonly, parakeratosis is seen in conjunction with elongation of the epithelial rete ridges. Neutrophilic microabscesses are often identified in the corneal and spinous layers. Chronic inflammation of the underlying connective tissue may be seen in longstanding Candida infections. Hyphae are found embedded within the parakeratin layer and rarely invade the underlying epithelium unless the patient is severely immunocompromised.

Hyphae, pseudohyphae (essentially elongated yeast cells), and yeast can readily be identified on staining with the periodic acid-Schiff (PAS) method. Fungal-cell walls contain an abundance of carbohydrates, the target of PAS staining. A 10% to 20% KOH preparation may be used to rapidly evaluate patients for the presence of fungal organisms. A culture can definitively identify the organism and is obtained by rubbing a sterile cotton swab over the lesion and streaking it on a Sabouraud agar slant. Within two to three days of incubation at room temperature, a creamy smooth-surfaced growth of C. albicans will appear.

There are a variety of treatment options for patients with oral candidiasis. Nystatin is the most popular treatment and has been in use since the 1950s. This medication is available as both a suspension and a pastille (lozenge).

Nystatin oral suspension is generally taken four times a day and is held in the mouth for as long as possible before the patient swallows or expectorates. Alternatively, one or two pastilles (200,000-400,000 units) may be dissolved slowly in the mouth, four to five times a day, for 10 to 14 days. Nystatin has a bitter taste, which may lead to low patient compliance. Clotrimazole is available as a pleasant-tasting lozenge and produces few side effects. Patients are instructed to dissolve one lozenge (10 mg) slowly in the mouth, five times a day for 10 to 14 days. Patients requiring systemic therapy are usually treated with fluconazole or itraconazole.7

The overall prognosis for individuals with oral candidiasis is excellent. Treatment with appropriate antifungals leads to rapid resolution. If the lesion does not respond appropriately to antifungal therapy, a biopsy should be performed to rule out such underlying disorders as squamous cell carcinoma or lichen planus. A workup for underlying immunosuppression should also be considered.

The patient in this case was treated with nystatin pastilles for two weeks with complete resolution.

Kerri Robbins, MD, is a resident in the Department of Dermatology at Baylor College of Medicine in Houston. b>Damjan Jutric is a second-year dental student at the University of Texas School of Dentistry, also in Houston. 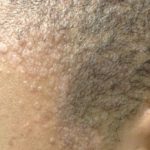