A 64-year-old woman presents with a lesion on her finger. She reports that it appeared 3 months earlier and is occasionally tender at times. At one point, she observed a thick mucus-like substance draining from the lesion. Physical examination reveals a translucent 6-mm nodule with surrounding erythema over the distal interphalangeal joint of the left fifth finger. In addition, there is a corresponding thin, vertical depression of the nail plate.

A 76-year-old woman presents with a new blister-like bubble on her middle finger. She notes that it appeared 2 weeks earlier and that it was slightly sore and moderately itchy. Other than hypertension and hypothyroidism, the patient’s medical history is unremarkable. Physical examination reveals a cystic papule with superficial umbilication over the lateral aspect of the right third middle finger.

Case #1Digital mucous cyst, also known as a myxoid cyst, is a benign tumor of the digits, representing a focal accumulation of mucin. Although these cysts usually occur on the fingers, occurrences on the toes have been reported.Digital mucous cysts...

Digital mucous cyst, also known as a myxoid cyst, is a benign tumor of the digits, representing a focal accumulation of mucin. Although these cysts usually occur on the fingers, occurrences on the toes have been reported.

Digital mucous cysts present throughout adulthood; frequency is highest in the sixth and seventh decades of life. Women are affected at a significantly higher rate than men.1

The etiology of digital mucous cysts is unknown. Although some of these cysts are associated with degenerative changes in the involved joint, with communication between the cyst and overlying joint space, other cysts are independent and are associated with a metabolic derangement of fibroblasts and increased production of hyaluronic acid.2 Radiologic studies often reveal osteoarthritis of the adjacent joint in association with myxoid cysts.3 In addition, trauma to the area may be a risk factor for cyst formation.

Clinically, a digital mucous cyst appears as a solitary, soft, 5- to 7-mm translucent or white dome-shaped nodule. The lesion is filled with a thick, clear, viscous fluid that can be expressed with a small incision, although occasionally the cyst drains spontaneously. The dorsal aspect of the distal finger is the most common site of presentation, specifically over the distal interphalangeal joint or at the proximal nail fold. Often, there is a vertical depression in the corresponding area of the nail plate, which results from pressure of the lesion on the underlying nail matrix.

Digital mucous cysts must be differentiated from similar-appearing lesions, such as an epidermal cyst, fibrokeratoma, rheumatoid nodule, or Heberden node. Malignancy, such as basal cell carcinoma, squamous cell carcinoma, and melanoma, must also be ruled out.

Diagnosis is usually clinical, and incision of the lesion with resulting mucoid drainage assists in confirming the correct diagnosis. Imaging can play a role in diagnosis, particularly if surgical treatment is considered. Ultrasound study results reveal a hypoechoic rounded mass with a visible tapering margin representing the neck of the cyst. Magnetic resonance imaging is excellent to study the soft tissue cyst structures.

Skin biopsy results demonstrate a pseudocyst with a fibrous capsule. There is no true cyst wall. A poorly defined mass of collagen or myxoid stroma is associated with interspersed stellate or spindle-shaped fibroblasts.5 Special mucin stain techniques, such as colloidal iron and Alcian blue, will reveal the mucin.

Myxoid cysts are often asymptomatic, and no treatment is needed; however, some patients report associated pain and tenderness and request management. There are several simple treatments that can be performed in an office setting, but these are often associated with higher rates of recurrence. Repeated needling involves puncturing the lesion, draining the gelatinous contents, and applying an occlusive pressure bandage. This is repeated on several occasions until the cyst ceases to recur. Aspiration and injection refers to drainage of the cyst followed by intralesional injection of triamcinolone acetonide. Cryotherapy with liquid nitrogen can be performed with a 15- to 30-second freeze time after unroofing the cyst. However, this procedure is often associated with more pain and scarring.

Several surgical treatments are available; some, particularly more aggressive techniques, are associated with nail deformity, joint stiffness, loss of motion, and higher risk of infection. One surgical technique, which involves a skin flap designed to include tissue from the undersurface of the cyst and the tissues between the joint and the cyst and which does not require excision or osteophyte removal, boasts a 92% success rate.6 Another small study proposed intralesional photodynamic therapy with injection of 5-aminolevulinic acid and subsequent laser radiation.7

In cases of benign neglect, no further follow-up is needed. Surgical patients require close observation to prevent postoperative complications. The patient in Case 1 was educated regarding the diagnosis and chose to observe the lesion, as it was asymptomatic.

Reactive perforating collagenosis (RPC), first described in 1967 by Mehregan et al,8 is an uncommon cutaneous condition resulting from abnormal collagen protruding through the epidermal layer of the skin. RPC is grouped with the other three major perforating diseases:  elastosis perforans serpiginosa, perforating folliculitis, and Kyrle disease.9 The inherited form of the disease presents in childhood, whereas the acquired form, on which Case 2 focuses, presents in adulthood. In 1994, Faver et al10 proposed three criteria for the diagnosis of RPC: (1) histopathologic findings of elimination of necrotic basophilic collagen tissue into a cup-shaped epidermal depression; (2) clinical presentation of umbilicated papules or nodules with a central adherent keratotic plug; and (3) onset of skin lesions after age 18 years.

The typical clinical presentation of RPC involves flesh-colored papules or nodules that first appear pinhead-sized and slowly expand over the course of a few weeks, reaching 4 to 6 mm. Depending on the stage of evolution, the lesion will exhibit an umbilicated surface or a central keratotic crust. These usually heal spontaneously, sometimes with scarring. In most cases, multiple lesions appear; distribution is common over the extensor surfaces of the extremities, on the dorsum of the hands, and scattered on the trunk. Lesions in a linear pattern may demonstrate the Koebner phenomenon.

The precise etiology is unknown, although most cases of acquired RPC appear to involve superficial trauma to the skin, predominantly in association with pruritus and excoriation. The disrupted collagen is then transformed into foreign material and it is removed by transepithelial elimination via the inflammatory response system.11 Acquired RPC is strongly associated with diabetes and renal failure. There is a small association with hypothyroidism, hyperparathyroidism, malignancies, and liver dysfunction.12

Although the overall incidence is rare, frequency has been estimated13 to be 10% in patients with renal failure who are on hemodialysis. Age and sex distribution is equal.

When multiple lesions of RPC are seen, as occurs commonly, other diagnoses to rule out include folliculitis, pityriasis lichenoides et varioliformis acuta, excoriated arthropod assault, neurodermatitis, or a disseminated vesicular disorder. When a solitary lesion appears, as in our patient’s case, other diagnoses to consider include digital mucous or epidermal inclusion cyst, lesion of perniosis, and molluscum contagiosum.

Skin biopsy is necessary for diagnosis. Histopathologic examination reveals expulsion of vertically arranged collagen fibers into an overlying keratin plug in association with a cup-shaped invagination of the epidermis and inflammatory debris. Depending on the stage of evolution, only some of these findings may be present.

Additional workup should be considered to rule out other associated disorders. Renal function tests will indicate kidney health, and ferritin and complete blood count values will rule out anemia. Glucose screening is essential to exclude diabetes. Screening for malignancy should be considered if no other etiology is identified.

Most lesions heal spontaneously, possibly with scarring, but the condition is often recurrent. When pruritus is present, treatment must be aimed at relieving the itching and scratching. Often, pruritus control alone is sufficient to induce remission of the condition. Emollients, antihistamines, and topical or intralesional corticosteroid injection may offer improvement.14 Anecdotal reports have reported success with retinoids, bleomycin, doxycycline, and ultraviolet B phototherapy.10

For the patient in this case, skin biopsy results of the lesion were consistent with prurigo nodularis, with features of RPC. The patient was questioned regarding associated diseases and referred to her primary physician for further workup. The biopsied lesion healed well without any evidence of recurrence. The patient was advised to avoid scratching and to follow up if new lesions appeared. She has since been lost to follow-up. 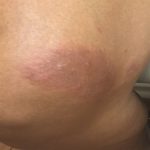