A 36-year-old woman presents to the clinic for treatment of a crusted pruritic rash located under both of her breasts. She was previously unconcerned about the rash because her mother had a similar type of “acne.” However, after joining her local sports team, she is worried that the heat and sweat of her uniform have worsened her rash. On further physical examination, the patient is found to have mildly greasy, red-brown papules along her nasolabial folds and hairline. Several of her fingernails have white lines running longitudinally from the nail bed.

Since then, Darier disease has been observed across ethnic groups and sexes. Estimates of the prevalence of Darier disease vary from 1 in 30,000 to 1 in 100,000.1,3,6 The disease onset is generally during childhood, with most symptoms manifesting before the third decade of life.2 Although Darier disease is an autosomal-dominant condition, 47% of patients with the disease have no known family history.6 For the inherited form, penetrance is estimated at >95%. Researchers believe that sporadic cases may be attributed to variable expressivity,3 where there might be an underlying family history with a milder subclinical disease presentation.3,6

Darier disease occurs as a result of a mutation of the ATP2A2 gene on chromosome 12. This gene encodes the sarco-endoplasmic reticulum Ca2+ ATPase (SERCA2), which maintains the high calcium concentration of the endoplasmic reticulum lumen and the low calcium concentration of the cell cytoplasm.3,6,7 The SERCA2 pump has been associated with protein synthesis and post-translational modification. Therefore, abnormalities of the pump result in disrupted cell signaling and defective protein production. Two isoforms of SERCA2 (2a and 2b) are located in the epidermis and play a role in the creation of desmosomal proteins.6-8

More than 250 different mutations of ATP2A2 that are associated with Darier disease have been reported in the literature.9 Given the breadth of mutations presenting with a common phenotype, researchers believe Darier disease occurs as a result of haploinsufficiency, where a single gene copy produces insufficient amounts of a gene product.7,8 Although the disease is autosomal dominantly inherited with near-complete penetrance, the wide expressivity of the lesions presents a challenge to clinicians and patients. Two family members with the same mutation may have significantly different clinical disease. The lack of a genotype-phenotype correlation makes genetic counseling and exploration of possible environment or epigenetic factors difficult.7,9,10

Darier disease typically presents with yellow-brown keratotic papules in the seborrheic areas of the face, neck, chest, and scalp. Papules range from pin-size dots to coalescing plaques that are often pruritic. Once coalesced, plaques can develop into large warty and vegetative growths. Plaques involving intertriginous areas (such as skin folds of the digits or breasts) may become macerated and infected, leading to odor. Most cases involve the hands, particularly keratoses of the dorsal surfaces, and pitting of the palmar surfaces can develop.6,7

Nail abnormalities are common in patients with Darier disease and can involve white or red longitudinal lines, V-shaped notches, or longitudinal ridging and splitting.1,11 Mucosal involvement is rarer and includes white papules of the oral mucosa, esophagus, and vulva. The most common site of involvement is the hard palate; however, gingivae, buccal mucosae, tongue, and parotid gland lesions have also been noted.1,2,6 Under dermoscopy, Darier lesions appear polygonal, star-like, or round-oval shaped and are surrounded by a thin white halo.4

Darier disease is a chronic condition that can be exacerbated by heat, humidity, perspiration, pregnancy, surgery, ultraviolet radiation, and mechanical irritation. Certain medications such as lithium and calcium channel blockers can worsen the disease, as can bacterial, fungal, and viral infections.3,6,12

The diagnosis of Darier disease is confirmed by histologic examination of skin biopsy in the context of clinical features. Histologically, acantholysis resulting from loss of cell adhesions and dyskeratosis from premature differentiation of keratinocytes of the stratum corneum can be seen. The stratum spinosum is notably thickened with suprabasal cleavage and acantholytic cells, and abnormal keratinocytes can be appreciated at these cleavage sites. The acantholytic and dyskeratotic cells form corps ronds and grains in the epidermis and corneum.3,4,6

Treatment of Darier disease involves symptom management. For patients with mild disease, avoiding triggers such as heat, sun, and sweating prevents exacerbations. In addition, topical emollients, antibacterial soaps, antifungals, salicylic acid, and retinoids can help manage the disease. Retinoids control hyperkeratosis: topical retinoids are appropriate for mild disease and systemic retinoids can be used for severe disease.3 Oral cyclosporine has also been shown to help in refractory cases. Aside from medical management, dermabrasion and laser therapy can induce disease remission. Although Darier disease is a chronic condition and still poorly understood, treatment options can significantly improve patients’ quality of life.3,6

The patient in this case was counseled to avoid triggers such as sun and heat. Treatment with topical retinoids resulted in resolution of her symptoms.

Karen Resnick, BS, and Yelena Dokic, BSA, are medical students at Baylor College of Medicine, and Christopher Rizk, MD, is a certified dermatologist at Elite Dermatology in Houston, Texas. 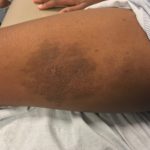 Hyperpigmented Patch on the Thigh